On Sept. 6, 2009, veteran Kansas City (Mo.) PD officers Dean McGinness and Eric Turner responded to a minor traffic collision. A driver later identified as 36-year-old Exae Chavez-Gutierrez hit a tree in a local park. It looked to be a run-of-the mill call. When the officers arrived, however, everything went sideways. And a vehicle kept everything from going south.

Officer McGinness arrived first and stopped his patrol car near Gutierrez, who was walking away from his vehicle in an odd manner. McGinness angled his vehicle in a tactical manner, providing a barrier between himself and Gutierrez. As soon as McGinness got out of the vehicle, Gutierrez started shooting at him. McGinness returned fire from his driver's side door, but he moved back and fell. He was able to get to the trunk area and return fire from a kneeling shooting position.

Officer Turner saw this gun battle taking place as he arrived. He saw McGinness fall and thought his partner had been shot. Turner immediately engaged Gutierrez and then ran to the rear of Officer McGinness's patrol vehicle, using the unit as cover and concealment. McGinness shot from a kneeling shooting position and Turner shot from a crouching shooting position. Gutierrez died in the gun battle. A toxicology report later confirmed Gutierrez had alcohol and marijuana in his system.

In this shooting, both officers used a patrol vehicle for concealment and cover. From start to finish, they made decisions that increased their survivability and in the end they both made it home unharmed. Well done. This shooting reaffirms the reality that we may be forced to use vehicles for cover and concealment. Taking some time to review the concepts of cover, concealment, and shooting fundamentals is time well spent. 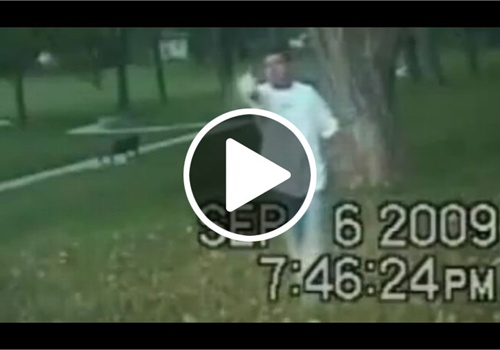 Every well-trained cop can explain the difference between cover and concealment. One common summary I have heard is "Cover stops the bullets that are being fired at you and concealment hides you from the suspect but does not stop bullets." But effectively using this knowledge in the heat of a gunfight isn't always easy. For concealment to work, the suspect must have no idea you are there. This is more difficult to achieve because generally when you can see the suspect, the suspect can potentially see you.

The other issue with concealment is that once the firearm battle begins, you are exposed. When thinking about cover, sometimes we forget that the combat conditions may change. An assailant may start the conflict shooting a small caliber handgun. But, what if he starts firing a large caliber rifle round? You may find out that your cover just turned into concealment and that you need to do some moving-quick.

During training, I have watched many officers stand up and use a vehicle for what they later described as cover. They exposed half of their body by standing and shooting, negating the advantage of cover and concealment. I watched other officers shooting over the roof of vehicles with their chests on the vehicle's door glass. When I asked them, "What cover or concealment does vehicle glass provide?" they usually just looked at me and said, "I know better than that." I knew they did, but why did they make critical errors that could have gotten them shot? The conclusion: stress, and lack of technique and training.

The truth is there are few areas on a vehicle that offer the least bit of cover. Some areas that do provide some cover are the engine block, rims, ballistic doors (if the vehicle is equipped with them), and not much else. By using kneeling and crouching shooting positions you can make better use of the cover and concealment a vehicle has to offer (photo 1).[PAGEBREAK]

For several years, I have had the honor of training with Randy Warfield, who retired from the United States Marine Corps as a chief warrant officer-4. During his career as a range officer, he and his staff were responsible for training literally thousands of Marines for combat. Warfield is now a sheriff's sergeant and law enforcement instructor who teaches three firing position fundamentals that I recommend you familiarize yourself with.

Warfield explains the basis of a good firing position is bone support. This establishes a stable and consistent foundation for the shooter. Your elbows should be close to your body, and your hands close to your chest. The second fundamental is muscular relaxation. If you have properly achieved bone support, you can relax your muscles. This relaxation will improve your accuracy and allow you to stay on target for longer periods of time. Pay special attention to the muscles of your shoulders, arms, and hands. The last fundamental is a natural point of aim. The muzzle of your firearm should be pointing at the suspect with the front sight right on the desired target. There should be no twisting of your upper body because it could create muscular tension. By combining these fundamentals, you can increase your accuracy under pressure.

Kneeling positions can help you achieve a lower profile that is very stable (photo 2). This can be valuable whether shooting a long gun or a pistol. There are many kneeling shooting platforms. One of the most common, however, is the bent toe kneeling position. The advantage of this position is stability. When kneeling, you can achieve more stability by placing the tricep of your front arm on your front knee (photo 3).

The crouching shooting position (photo 4) allows you to move and shoot while still using the cover and concealment a vehicle can provide. It is important to bend your knees and lower your center of gravity. Like kneeling shooting, the fundamentals still apply: bone support, muscular relaxation, and a natural point of aim. You should never move faster than you can accurately shoot. A slow hit is better than a fast miss.

Regardless of your shooting position, being too close to cover can limit your field of vision and put you in danger if the suspect's rounds skip off the ground or off the vehicle you're crouching behind (photo 5). This is why Corporal Chris Hice, a team leader and trainer on the Rialto Police Department SWAT team in Southern California, teaches his officers to keep at least an 18-inch standoff distance when they are shooting behind a vehicle for cover and concealment. This distance gives his officers a better field of view and greater mobility. The added benefit is that any rounds that may skip off of the vehicle have less of a chance of hitting the officers.

Hice's experience has shown the kneeling position is static and better for more stable accurate shooting. However, it requires a shoulder weapon side, upper torso swing for quick target acquisition. The crouching position offers more mobility, vision, and a 180-degree field of fire. Using a combination of a kneeling shooting position, cover from a vehicle's engine block and wheel, and standoff distance from the vehicle increases officer safety.

Use a Long Gun

When you find yourself facing a threat, you also need the right firepower. Clint Smith is president and director of Thunder Ranch, one of the premier firearms instruction facilities in the world. Smith is known for saying, "The only purpose for a pistol is to fight your way back to the rifle you should have never laid down." I cannot agree more. Under most circumstances, if you are going to get into a gunfight, do it with a long gun. You will be giving yourself the edge that could save your life. It is in the car for a reason.

Some officers hesitate to use the long gun because they are worried the rounds may over-penetrate. That's why it is important for firearms instructors and agencies to not only buy good ammo, but to explain and even show officers how it works on real-world targets. How about asking your agency to make a video that shows officers how their ammo penetrates drywall, wood, car doors, glass, and other barriers? That information might give them the confidence to more readily use their long guns.

In these times of cost cutting, it seems like one of the first places that takes a hit is the training budget. Some agencies, in an attempt to save money, have officers qualify with their long guns less frequently than they do with their handguns. But it is important that when officers qualify, they use all of their firearms. It is a firearms qualification, not just a pistol qualification. When it comes down to it, you want as many literal and metaphorical weapons at your disposal as possible to win the fight.

The reality is we rarely get to choose where and when our officer-involved shootings occur. Many times they happen fast and we have to react even faster. There are many schools of thought on shooting near vehicles. Some officers have found the techniques above to be very helpful. Find out what works best for you and practice. Train or pain, it is your choice.