Earlier this week we reported that the chief of police for the Toledo (OH) Police Department has banned officers from wearing load-bearing vests that have been credited by many with relieving back pain associated with wearing duty belts that carry an officer's duty gear.

Chief George Kral reportedly said, "In my opinion, that looks too much like a military soldier."

Kral said he knew his decision would be unpopular with officers.

I don't agree with Chief Kral on this particular matter.

I think LBVs have enormous benefit for officers' physical well-being, especially in relieving chronic back pain. Further, LBVs make it easier to access tools such as handcuffs, ECDs, batons, and even pads of paper and pens.

However, I'd bet a waist-high stack of green money that Chief Kral and I would agree on a bunch of other things, so I'm not going to pounce on him—it's his agency, and his officers are his responsibility, not mine.

However, reporting on the story out of Toledo this week prompted me to revisit the larger topic of "police militarization" in general.

The rhetoric around "militarization" of law enforcement is not new. Violent riots in the 1960s and 1970s led police to adopt helmets and face guards to protect against injury. Critics called that self-defense against hurled bottles and rocks and bricks "militarization."

Following the 1986 gunfight that claimed the lives of FBI Special Agents Jerry Dove and Benjamin Grogan in Miami, law enforcement agencies turned to pioneers like Richard Davis to provide bullet-resistant vests. Critics called this another instance of "militarization."

Following the 1997 North Hollywood shootout, police determined that they needed long guns chambered in 5.56 or better to deal with individuals who at the time substantially outgunned them. Critics called this evening of the playing field "militarization."

Some would even trace back the matter of "militarization" of law enforcement to the actual deployment of the United States Military in former Confederate states following the American Civil War during what was then called "reconstruction"—that actually in retrospect devolved into de-facto deconstruction.

The debate on "militarization" of American law enforcement has deep history. However, the discussion should now turn to the future of public safety in the United States.

It's no secret that among the roughly 18,000 law enforcement agencies in the United States, there are a substantial number that face shrinking budgets at the same time citizens in those jurisdictions are demanding more services with faster response times utilizing aging equipment.

Fortunately, in the National Defense Authorization Act for Fiscal Years 1990 and 1991, the United States Congress authorized the transfer of surplus Defense Department property to federal and state law enforcement agencies to help police serve their communities.

Countless MRAPs, M-4s, and maritime assets that would otherwise have been "mothballed" have been responsibly transferred to law enforcement agencies large and small from coast to coast.

Less visible but equally important, the 1033 program has benefited myriad agencies that now have desks, air conditioners, computers, and medical kits that would have been landfill if not repurposed for police use.

I'll take that kind of "militarization" any day of the week—and twice on Sundays.

The War on Cops

In just the last few days we've seen unprovoked violent ambush attacks on police officers in New York. Just days before that, an officer in California came under fire, with a bullet striking him in the chest. He was saved by his body-worn camera.

There have been dozens of brazen violent attacks on police officers across the country in the past 10 years or more. Many have resulted in the tragic death of officers. Others have resulted in terrible injuries—some of them career-ending.

Last year we found out that a University of California professor—who teaches English and comparative literature at UC Davis, and according to his official bio specializes in Marxism and "the end of capitalism"—said in an interview published in early 2016, "People think that cops need to be reformed. They need to be killed."

Officers are under attack from all angles.

I want them to have surplus body armor and ballistic helmets to ensure their safety.

As is the case with most things, the middle is probably the place that offers the most sustainable and reasonable solutions. This is borderline blasphemy in an age of outrage on the extremes of just about every topic of conversation, but it's true.

There's the ongoing national debate about whether or not police officers are warriors or guardians.

The meeting in the middle is "yes"—at times an officer is a guardian and at times he or she is a warrior.

Sometimes they're both at the same time. We cannot live in a prison of just two ideas.

The discussion around "militarization" in law enforcement should be had with the same level-headed approach.

People who call law enforcement armored vehicles "tanks" are almost always willfully ignorant of what a "tank" actually is and how it differs from a rescue vehicle. Calling a semi-automatic patrol rifle a "machine gun" is an equally inadequate description that indicates a lack of understanding of the difference between the two.

The "militarization" discussion comes down to optics.

I'm reminded of a story I learned long ago. I've recounted it in this space before, but it seems pertinent to this discussion so I'll repeat it once more.

Two mountaineers stand atop two peaks on the east and west sides—respectively—of a broad basin. Each climber surveys the vast valley, seeing the gorge full with copses of trees dotting a winding river.

The sun is at a high-noon—due-south in the sky—and long shadows are cast from the high treetops.

The hiker on the eastern peak shouts, "Look at how the shadows are cast so beautifully from left to right with the sunlight!"

The hiker on the western peak replies, "No! Those shadows—agreeably, so beautiful—fall from right to left!"

Both individuals are correct, given their relative position to the valley, the sun, and the shadows.

The fact of the matter is that the shadows are cast from south to north.

How you see things greatly depends on your relative position to what you're looking at.

I'll meet you in the valley. 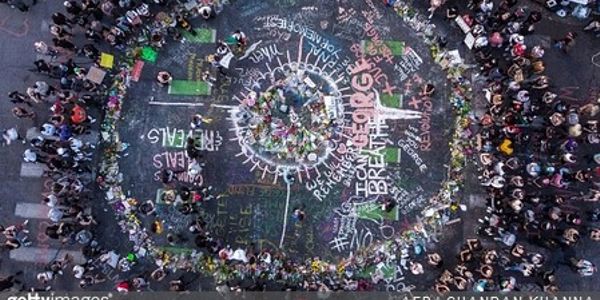