An escapee from a Pickens County, SC, detention center was shot and killed by an area homeowner Tuesday night while trying to break into the woman's house, officials say.

Clark said the attack on two longtime officers was part of a premeditated plan that the inmates had formed over a period of days or weeks. He said the Pickens County Sheriff's Office is still investigating the possibility that a third inmate who did not escape was involved in overtaking the officers guarding the prison, GreenvilleOnline reports.

Clark identified the surviving inmate who was captured as Timothy Cleveland Dill, who is charged with criminal sexual conduct with a minor. The inmate who was killed was identified as Bruce Webb McLaughlin Jr., 30, according to a statement from Pickens County Coroner Kandy Kelley.

McLaughlin was shot by the homeowner after he broke into her house through the back door, Clark said. He said the woman lived alone and had a concealed-weapons permit. The home is less than a half-mile away from the detention center.

McLaughlin was in jail on charges of first-degree burglary and grand larceny stemming from an alleged incident from September. His criminal record includes convictions on a weapon charge in 2006, an assault on a police officer while resisting arrest in 2007 and drug charges.

An officer with the Newport News (VA) Police Department was dragged by a vehicle driven by a suspect attempting to flee a traffic stop on Thursday evening. 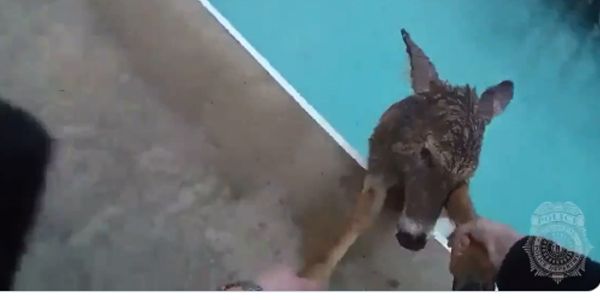 An officer with the Lexington (KY) Police Department enlisted the assistance of a local resident in helping a deer trapped in a swimming pool to safety and onto solid ground. Video of the incident has gone viral on social media.

An officer with the Costa Mesa Police Department who was responding to an emergency call collided with another motorist at an intersection on Thursday morning.

An officer with the Kingston (PA) Police Department fired a single shot at a man who appeared to be armed with a gun and was approaching paramedics who had responded to a call of a medical emergency on Thursday morning.