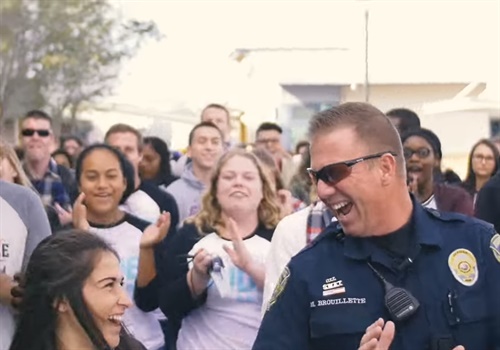 Police officers and kids often have a special bond. Police officers have a unique opportunity to positively influence the lives of countless children — many of whom do not really have very many positive role models in their lives — to become productive members of society when they grow up. They can quite literally turn a kid's life around with one interaction.

Police officers intervene in domestic disputes at which the children present are scared and uncertain. They come to the rescue at the scene of a traffic collision or a house fire. They walk the halls of the school, not only enforcing the law and school policy, but providing mentorship and friendship to kids who might otherwise feel shunned.

With each positive police interaction, officers are — hopefully — making deposits in the Bank of Goodwill, creating lasting memories of being "the helper" and "the good guy."

Another possible outcome — someday seeing some of those kids sworn in as fellow officers.

It's no secret that many police agencies are having a hard time finding qualified candidates to become police officers. The problem has been well documented that many people entering the workforce look at policing — with diminishing pay, vanishing pensions, high risk of death or great bodily harm, and of course, a hostile public — and are deciding en masse to choose another career.

Cops on the streets — acting as ambassadors to children from infants to teenagers — might have the ability to reverse that trend.

It has long been my contention that the long-term solution to the current anti-police sentiment is the long-term strategy of increasing officer involvement and visibility with the nation's young people — in essence, to "Get 'em when they're young."

This same philosophy can also be used by the recruiting unit.

Many police departments have a pop-up tent, a folding table, and a bunch of knick-knacks with the department badge or logo to give away during street festivals and other events. This is a very passive recruitment tool — and arguably, a substantial waste of time and resources.

Where the real recruitment opportunities exist are in the day-to-day contact between young people and the police officers who serve their communities.

Where time and resources are better applied are formal programs that put cops and kids in close proximity so that real relationships are naturally developed over time.

Naturally, this begins with employing SROs in your schools. Particularly in middle and high school years, having direct daily contact with an officer in the hallways can have an incredibly positive impact on kids. When an SRO is really active and really successful, kids will go out of their way to not only talk with him or her, but to thank them for their service.

Just ask Officer Mitch, who works at Heritage High School in the San Francisco Bay Area. The way the kids there said thanks was truly EPIC — watch the video above to see what they did.

If your department doesn't have an SRO program — but is considering one — get in touch with the National Association of School Resource Officers (NASRO) for their advice and recommended best practices.

However, there also are numerous other formalized endeavors for departments to consider in addition to SROs in schools.

I'm talking about things like Explorer programs, Police Athletic Leagues, Teen Cadet Academies, summer internship programs, Shop with a Cop, and other department-funded initiatives that deliver valuable services to children of all ages.

I'm particularly a fan of the athletic leagues, the Cadet programs, and the Explorer programs, because they directly develop police-related skills, and encourage interest in learning about the profession from the inside out, well before any career decision must be made.

Admittedly, these programs require a considerable investment in both police officers' time and the city's money, but when one makes the argument that the return on that investment is an increase in the number of qualified — and interested — police recruits, the expenditure begins to look like a good idea.

Further, if there really is no budget, seek outside help. Local philanthropists might donate to a program, or you can make contact with your local American Legion post —nationally, American Legion encourages local posts to assist police in creating cadet academies for teenage boys and girls who have completed their junior year of high school.

Beyond these formal programs, there is simply the impromptu actions of officers on patrol that help kids see that the police are just regular people — who, admittedly, carry a gun and have the authority to arrest bad guys.

One simply cannot understate the impact that spontaneous and unplanned interactions can have on a child's perception of police.

Remember when officers from the Brooklyn Park (MN) Police Department heard that a young boy’s lemonade stand profits were stolen from him, and responded by sending squad car after squad car to the location to purchase about $50 dollars' worth of fresh lemonade.

Remember when officers from the Westwood (NJ) Police Department delivered a new bicycle to a 13-year-old boy who discovered one morning that his had been taken from his front porch.

Remember when officers from the Augusta (ME) Police Department showed up en masse with balloons and a birthday cake when they learned that none of an 8-year-old girl's friends were able to attend her birthday party.

It's impossible to say how many other stories such as these happen every single day in America — as I've previously written, one of the things that departments have to get better at is telling those stories.

It's also impossible to estimate how many times such incidents and interactions directly led to a child making up their mind that they wanted to grow up to be a cop. But the potential upside of such actions — while unknown — is enormous indeed, and the potential downside is non-existent.

Whether it is kids raising money with a lemonade stand to help a wounded officer, or officers buying a new toy electric car for a little boy who had his stolen, the relationship between little ones and the men and women of law enforcement can be heartwarming and inspiring.

Doug Wyllie has authored thousands of feature articles, opinion columns, news reports, and tactical tips with the goal of ensuring that police officers are safer and more successful on the streets. Doug is a Western Publishing Association “Maggie Award” winner for Best Regularly Featured Digital Edition Column. He is a member of International Law Enforcement Educators and Trainers Association (ILEETA), an Associate Member of the California Peace Officers’ Association (CPOA), and a member of the Public Safety Writers Association (PSWA).

Doug Wyllie has authored thousands of feature articles, opinion columns, news reports, and tactical tips with the goal of ensuring that police officers are safer and more successful on the streets. Doug is a Western Publishing Association “Maggie Award” winner for Best Regularly Featured Digital Edition Column. He is a member of International Law Enforcement Educators and Trainers Association (ILEETA), an Associate Member of the California Peace Officers’ Association (CPOA), and a member of the Public Safety Writers Association (PSWA).