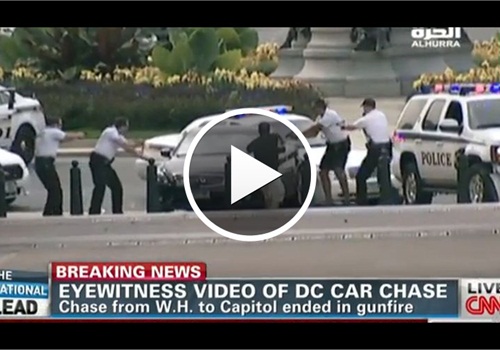 Law enforcement's use of deadly force at the end of the U.S. Capitol pursuit may not satisfy the mainstream media or other second guessers, but it was the proper response to a lethal situation.

Based on what we know publicly, a volatile subject attempted to breach a White House security barrier on Oct. 3 by ramming a black Infiniti into it. When the subject failed, they rammed a responding radio car, and struck a U.S. Secret Service agent. The subject then exposed the officers to great risk by speeding away at high speed in a reckless manner. The subject ultimately crashed the vehicle into a U.S. Capitol Police barricade. Officers stopped the potentially lethal threat by appropriately deploying their firearms.

Notice my reference to the individual who initiated the lethal scenario as a "subject." Responding officers were confronted by a potentially lethal threat, rather than a young attractive woman with her child in the rear seat. In assessing the appropriate level of force in this situation, gender should not be considered. All hands and feet are equally potentially lethal when applied to the steering wheel and gas pedal respectively. Inevitably, the news media's bias drew upon the subject's gender and appearance to criticize the level of force used.

Regarding the child in the vehicle, no one envies the officers who were on scene during the initial and final vehicular attacks. We don't know whether the officers were able to see the child in the back seat, especially considering window visibility factors. The officers demonstrated remarkable restraint when the subject first attempted to breach the security using her vehicle as a lethal weapon.

The presence of the child should be viewed as a potential victim of the subject's lethal behavior, and the officers should be commended for rescuing her without injury. History has shown us that subjects exuding irrational, lethal behavior have exploited children to accomplish their deadly objectives. The presence of a child, as heart wrenching as it may be, doesn't reduce the level of threat posed by the subject.

In terms of the use of deadly force, federal law enforcement officers follow the same policy and concept. We discharge our weapons as a last resort to stop a potentially lethal threat, and prevent serious bodily injury or loss of life.

Based on what is known, the officers used the appropriate level of force considering their reasonable perception of the threat level initiated by the subject. Based on her volatile use of the Infiniti, and the fact that she rammed government property and federal officers, she posed a potentially lethal threat to the officers. The subject also posed a lethal threat to those in the immediate area, including the child in her vehicle, by driving in a reckless manner.

While it was obvious that the subject used her vehicle in a hazardous manner to gain unauthorized entry to government property, there was no way to discern whether the vehicle contained any explosive material or other weapons that could have fatally wounded the officers or bystanders. Officers assess available threat indicators in micro-seconds and react accordingly.

Critics often ask why officers didn't shoot at the tires. The answer is that law enforcement tactics don't follow Hollywood fiction. They must respond in the real world. Warning shots and shooting at tires are usually prohibited by agency policy because they pose a greater threat to those in the immediate area. Shooting at tires would create a dangerous ricochet swarm that exposes anyone in the immediate area to significant risk.

The officers should be commended for their performance. The second-guessing, "could have" committee will draw upon the subject's publicized mental health history, and somehow suggest the officers should have known this and tempered their response. That's nonsense. There's no pause button for an officer to hit while being confronted by a lethal threat. Law enforcement officers receive training on how to deal with subjects with known mental illness, but in this situation, the officers needed to objectively assess what was known at the time of the attacks and respond appropriately.

While the loss of life is regrettable, it's fortuitous that no law enforcement officers or innocent civilians were killed. The Secret Service and Capitol Police have a very dangerous job, and they carry out their respective high-risk missions with the utmost degree of professionalism. I applaud them for their unwavering service to our country, and for confronting volatile subjects to keep us safe.

The "Accident Chain" and the In-Custody Death of George Floyd

In aviation, an accident chain usually ends with one or more people dead in a twisted mass of burning metal, investigators conducting a lengthy and expensive inquiry, and mourners lashing out at those responsible for a series of fatal mistakes... Sound familiar?

Officers must assess the risk versus the reward of putting holes in the tires of a fast-moving vehicle while standing dangerously close to the roadway.

The SDPD’s Emergency Vehicle Operator Course (EVOC) instructors are creating a training video on PIU Hybrid operation that will be required viewing for police officers before they can drive the vehicles.

A COVID-19 Conundrum: Enforcing Lockdown Mandates vs. Enforcing the Law

A good number of law enforcement leaders are coming to the conclusion that these "orders" are not law and that enforcing them is preventing them from enforcing actual law.

Preparing for the Prospect of a "Suicide by Cop" Incident

Accept the fact that a suicide-by-cop incident could happen to you on any call on every shift you work.

Amid the COVID-19 Crisis, Officers Persist in Acts of Kindness

There are countless acts of kindness being performed by officers across the country who are going well above and beyond their call of duty to assist people who are in need.

This week in this space, I want to do something a little different. I want to provide you with some inspirational quotes to help you muddle through these troubling and trying times. I'll also add my interpretation of the quotes as they related to law enforcement.

This is going to get worse—far, far worse—before it's going to get better, but contrary to what many in the mainstream media would have you believe, the world is not ending. We are going to get through this—the question is, "When?"

In this column for the past few weeks I've tried to pass along useful information about being safe during the global pandemic of COVID-19. This week I just want to provide some levity to aid in your sanity.

One respondent wrote: "All personal protective equipment is in limited to no supply. We are taking public donations to keep our officers in gloves and sanitizer. We are purchasing PPE from Ebay to meet our immediate needs."

Hundreds of police officers have been exposed to the disease, with nearly 200 reported cases in Washington state alone. Here are some thoughts on how police officers can keep safe amid this current pandemic crisis.

How will officers who are symptomatic of the coronavirus now be able to substantiate its impact on their health in the future?

An increasing number of officers—at least two dozen in Washington, another two dozen in California, and several more in other states—have been ordered into quarantine.