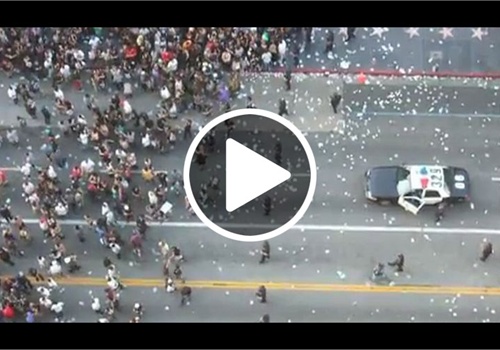 The "Hollywood Riot" started with DJ Kaskade's Twitter message inviting people to an impromptu block party at the Hollywood premiere of the Electric Daisy Carnival documentary. In response to the Twitter announcement, 2,000 young people showed up — many expected a free movie premier they later learned could only be attended by ticketed invitation.

Soon, the overflow crowd of 2,000 took over the sidewalks and street of Hollywood Boulevard in front of the Grauman's Chinese Theatre. Vehicle and pedestrian traffic was effectively blocked and the chaotic crowd forced the cancelation of the movie premiere.

The LAPD's marked units began arriving amid the chaos. At that point, the aimless crowd was transforming into a mindless mob. Soon, LAPD officers set up a skirmish line in the street and faced off with the mob. Officers were soon joined by additional LAPD units.

Much of the "action" was captured via YouTube videos from the street, air, and other angles. The footage and pictures showed a highly trained, prepared, equipped, organized, and professional LAPD response.

I'm an avid proponent of plugging SWAT into any riot control situation, particularly those involving potential or actual violence. SWAT not only enhances police capability and confidence; tactical officers bring a chilling effect to crowds. A show of force usually dissuades all but the most ardent to cease and desist their unruly actions.

Predictably, some in the mob tried unsuccessfully to take on the LAPD, who ultimately succeeded in clearing the street of trouble makers. Bottles started to fly at the officers who, after several marked units were damaged, deployed less-lethal munitions and began arresting people.

The LAPD was able to successfully disperse the 2,000-person mob without it turning into an all-out riot. In its wake, the "block party" left the street littered with debris; the movie premiere was canceled; and the Los Angeles DJ apologized.

No doubt, the revelers are looking forward to the next impromptu Twitter invitation. There's no doubt LAPD and SWAT will be there to greet them again.

The "Hollywood Riot" is the second near-riot incident this July in California.  On July 16, a controversial police shooting in San Francisco's Bayview district immediately degenerated into a swirling, chaotic anti-police mob.

The SFPD tactical squad also responded fully geared up with their Armored Rescue Vehicle (ARV) at the ready. Just as I'm certain LAPD SWAT's presence chilled many from violence, I have no doubt the sight of SFPD's SWAT had a similar chilling effect on the angry, hostile, anti-police mob.

I'm a firm believer that SWAT needs to be called out for all riots if and when there'ss violence aimed at police that may involve firearms. This is exactly what LAPD and SFPD did, requesting SWAT assistance that undoubtedly helped prevent rioting, violence and casualties.

Both LAPD and SFPD are highly professional police departments with outstanding SWAT units that have a wealth of riot control experience.

Their professionalism and experience prevented two volatile situations from erupting into something far worse. This is a valuable lesson that all LE agencies can, and should, learn from.

SWAT was originally created to diffuse incidents of extraordinary violence and danger, beyond the capabilities of police. This SWAT mission remains just as valid today more than 40 years later.

What many may not know or remember is the original reasons why LAPD formed its vaunted SWAT unit. The better-remembered, deadly University of Texas tower sniper, and the lesser-remembered 1965 Los Angeles Watts Riots of 1965. LAPD's SWAT was born during the "riot era" of the 1960s.

Some things never change, which the LAPD's SWAT response to the "Hollywood Riot" illustrates.

If we are truly serious about reducing active shooter deaths, we must stop the political posturing and the self-serving, useless rhetoric and commit ourselves to the many viable solutions that are out there. We owe it to our children to find a way.

With the exception of the military-related attacks at Fort Hood and the Washington Navy Yard, terrorists and criminals are more likely to assault a facility where resistance is minimal—a "soft" target.

What LE Can Learn From the Kenya Mall Attack

These types of attacks illustrate the pattern that terrorists are committed to inflicting death and destruction anywhere to generate headlines and rally other lunatics to their cause. They are prepared to do anything to win.

Incorporate Fitness Into Your SWAT Training

Part of the SWAT lifestyle is fitness; make no mistake about it. Teams should not have the "look" of a model but actually just good sound fit individuals to hold things together in a time of crisis.

How To Start a Tactical Team

There are plenty of behind-the-scenes preparations needed to form a tactical team. It's not just gathering a group, getting fancy tactical dress, and heading out for some shooting.

A trio of ATF commanders have offered new details about the failed Waco raid and outlined changes within the agency since 1993, as the agency remembers its four fallen agents on the 20th anniversary.

Inside the FBI's Alabama Bunker Raid

The carefully orchestrated raid that ended a hostage standoff at a survivalist's bunker in Midland City, Ala., was a SWAT tactic of last resort for the FBI's Hostage Rescue Team (HRT).

Every Officer Should Be Trained In SWAT Basics

Shouldn't every good basic cop have the ability to quickly stack, flow into a room, hold a position if a SWAT team leader stated, "you two post this hallway," and back-clear or secondary search several rooms?