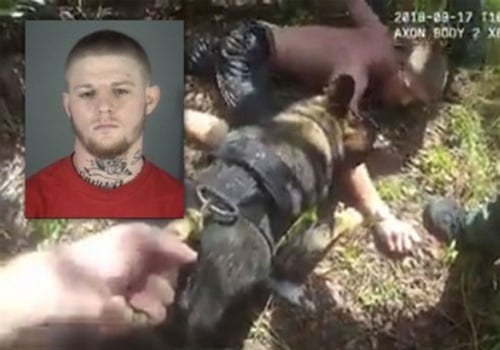 A K-9 with the Pasco County (FL) Sheriff's Office helped take down a man who allegedly attempted to kidnap a child from a home northwest of Tampa on Monday.

Body-worn video showed the K-9—named "Titan"—grab and hold onto 24-year-old Kevin Wilson, who had reportedly climbed into a second-story window, grabbed a child and fled.

The sheriff's office said that there was a no-contact order in place, and Wilson was not supposed to have contact with the mother or to enter the home. The child's uncle grabbed his gun and confronted Wilson in the front yard before the 24-year-old released the child and fled, according to Fox News.

Titan and his handler found the suspect in a wooded area and took him into custody.

Wilson has been charged with interference with custody, child neglect in addition to violating his no-contact order, and is being held at the Pasco County Jail.