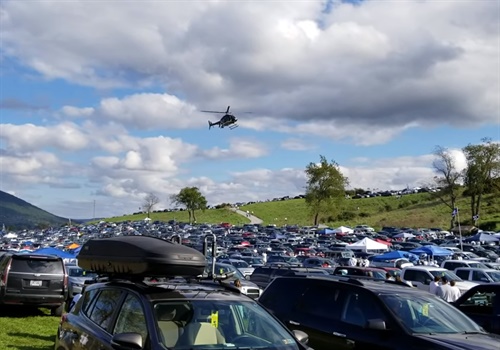 A Pennsylvania State police helicopter was called in to hover low over a tailgate party prior to the Penn State football game against Ohio State on Saturday.

According to WGAL-TV, the helicopter was called when party-goers started "getting out of hand" and tailgaters had ignored commands from police on the ground to disperse.

According to Fox News, a state trooper suffered a broken wrist while trying to arrest a man who allegedly struck a state police horse that had been summoned to break up a party.

The 11th-ranked Nittnay Lions eventually lost the game to 3rd-ranked Ohio State Buckeyes by a score of 26-27.

The proposal would ban cities and counties from cutting spending on police departments by more than 5% in a year, unless they experience revenue loss.

Chief Rich Ferguson said the man had two semi-automatic rifles. When officers arrived on scene, he retreated into his home and began shooting. Officers then returned fire.

Fayetteville police said the car left the roadway and crashed into a tree, bursting into flames. An off-duty officer called 911.

Half of Survey's Very Liberal Respondents Believe 1,000 or More Unarmed Black Men Killed by Police in 2019