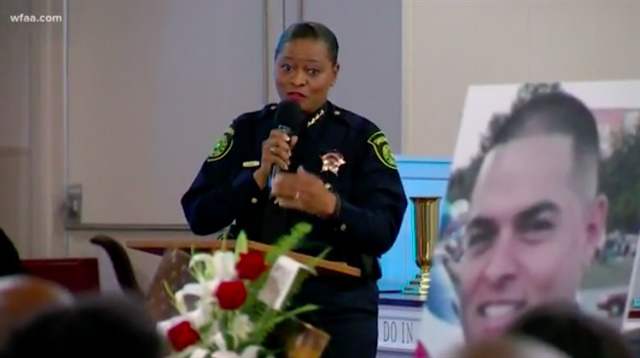 A 40-year-old father of three, Calderon took his own life after a battle with depression. “He was so sad, I mean it was obvious,” said his widow ShaRonda Calderon. The couple had been married since 2012 and together since 2001.

Her husband’s funeral was a tribute, but not what she, a one-time sheriff’s department employee, expected. “There were a lot of things that I was told should have happened that didn’t happen,” she said.

The Dallas County Sheriff’s department uses what are called general orders as their guideline for protocol.

The orders explicitly state Calderon would not receive full honors – those are reserved for line of duty deaths – but the orders do state that deputies who die while off-duty are to be given an officer standing watch beside the casket, an honor guard, a bugler, and a final call broadcasting their badge numbers on the radio.

Those things did not happen, even though ShaRonda said she wanted them, WFAA TV reports.

The funeral was Interim Dallas County Sheriff Marian Brown’s decision. When asked about the honors Calderon did not receive, Brown released a statement explaining the general orders do not address suicide. Brown added, “Due to the nature of Deputy Calderon’s death, the sheriff’s department does not want to condone nor appear to glamorize suicide.”