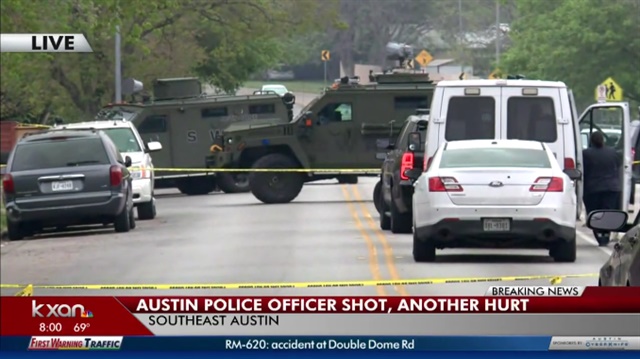 One police officer was shot and a second was hurt while running for safety after a gunman fired at them from inside a southeast Austin, TX, home Sunday night. The SWAT team then reportedly fatally shot the suspected shooter as he tried to run away from the home with a woman.

Austin PD says officers were called to a duplex on Ponciana Drive at 10:50 p.m. when someone called 911 and was disconnected. Officers knocked on one side of the duplex and a resident told them they did not call 911, reports KXAN.

When the officers tried the second unit, there was no answer. As they were leaving, Austin PD says someone fired on their officers, shooting one in the arm. The second officer hurt his hand and knee while running for safety.

The SWAT team was called out and officers heard gunshots inside as they told the suspect to come out. Police eventually used a robot to breach the front door. Then the suspect ran out with a woman. A SWAT officer shot the suspect and he was pronounced dead.