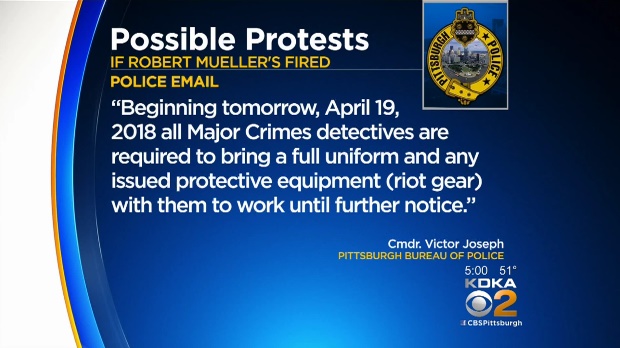 A memo went out to the police department from Victor Joseph, commander of the Pittsburgh Bureau of police.

In the memo the department’s detectives are instructed to begin wearing a full uniform and carrying riot gear with them in anticipation of massive protests, CBS Pittsburgh reports.

Police believe the protest would happen within 24 hours of Mueller’s firing.

“We have received information of a potential large scale protest in the Central Business District. The protest would be semi-spontaneous and more than likely happen on short notice,” the email says. “Beginning Thursday, all Major Crimes detectives are required to bring a full uniform and any issued protective equipment (riot gear) with them to work until further notice.”