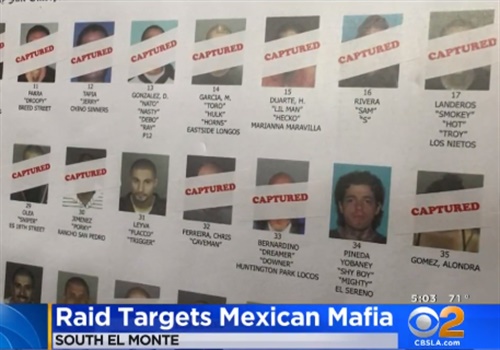 Multiple warrants were served as part of Operation Dirty Thirds, FBI spokeswoman Laura Eimiller said. "Dirty thirds" was in reference to the third of jail drugs or profits that had to be paid to the mafia by non-members.

"These cases have delivered a major blow to the Mexican Mafia and leaders of many of the street gangs under the control of the organization," U.S. Attorney Nick Hanna said at a news conference to announce the arrests. "By taking out the gang members who control the jails, and by disrupting their communications network, we undermined the Mexican Mafia's ability to coordinate street gang activity."

The indictments said the gang enriched itself through drug sales, collecting taxes on drugs, and even collecting a share of purchases from the jail commissary. It was able to exert control by threatening and carrying out violence if people didn't pay up or follow the rules.

More than 500 personnel from various law enforcement agencies executed the takedown, taking into custody 32 defendants charged in two federal racketeering indictments that name 83 defendants, according to the U.S. Attorney's Office.