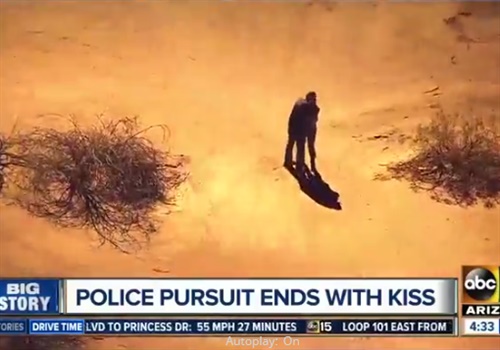 A high-speed police pursuit through the southeast Valley near Phoenix Wednesday night ended with an embrace and two people taken into custody, reports KNXV-TV.

Air15 video showed police converging on the two suspects after they bailed out of the SUV around 6:15 p.m. near Ironwood and Guadalupe.

Around 9 p.m., authorities identified the suspects as 35-year-old Dustin Perkins of Snowflake and 29-year-old Lovida Flores. Perkins suffered a broken hand during the crash and Flores was listed in serious condition.

Mesa police said the incident started with a report of a stolen vehicle from the Salt River Police Department.