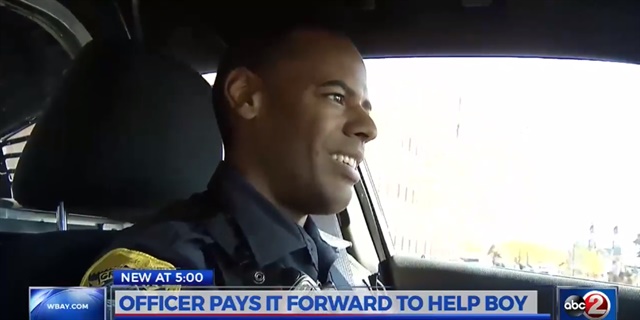 VIDEO: WI Officer Cheers Up Boy Alone on His Birthday

Green Bay (WI) Police Officer Darryl Robinson is being praised for making a ride with a police officer and a meal at McDonald's possible for an 8-year-old who needed a lift on his birthday, reports WBAY.

On Monday, police received a call from staff at Howe Elementary School about a student who had just turned 8-years-old that day, but had no one to pick him up from school.

"They said that his mother was incarcerated and there was no one on the emergency contact to pick him up," Officer Robinson says.

Robinson got a hold of the boy's grandfather and got permission to take the boy to McDonald's.

"So we brought the 8-year-old to a squad. He'd never been in a police car before and was very excited to ride in one," Officer Robinson says. "We gave him some Packer cards and little Green Bay Police tattoo. And then I brought him to McDonald's, got him a sandwich and then brought him home, turned him over to his grandfather and he had some other siblings there as well."

Officer Robinson knows how this little boy feels. Former Green Bay Police Captain Bill Bongle showed that same kindness to a young Robinson, serving as a mentor and inspiring him to join the profession himself five years ago.

Officer Robinson says he'll keep in touch with the little boy, whether he wants to be a police officer or not. But he says, "If I can have the impact Bongle did for me, and he could choose a career in law enforcement and keep this cycle going, I think it would be great."