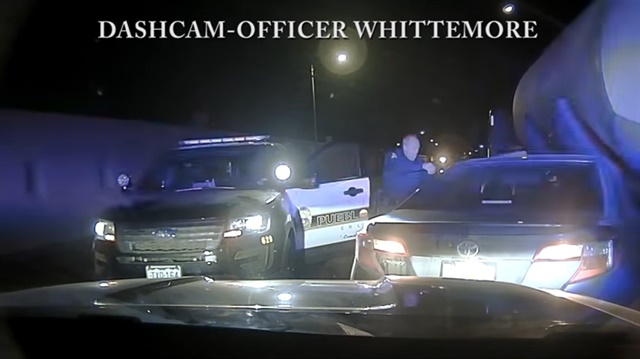 Nine months after a man who Pueblo Police say was a known gang member was shot and killed by officers during a tense confrontation, the department released body camera footage of the incident showing multiple vantage points.

The Pueblo Police Department chose to release the video publicly in light of a criminal justice records request, according to a news release that was distributed on Wednesday morning. The officers involved were cleared of any wrongdoing by the Pueblo County District Attorney's Office on Aug. 14.

Pueblo Police say they were searching for the suspect, identified as 35-year-old Andrew Byrd, after a woman reported that he was armed and had stolen her vehicle the night of Feb. 4, 2017. He had several warrants for his arrest at the time, according to the Pueblo Police Department.

Officers stopped Byrd and here is the account of what happened during the shooting according to the department's news release.

“Mr. Byrd put his hands up. but then reached down to the console shifter and turned around to look back at Officer Whittemore. Mr. Byrd then disregarded officers’ commands and rapidly reversed the Camry, violently crashing into the front of Mr. Whittemore’s patrol vehicle and physically knocking Officer Whittemore, who was standing outside of his patrol vehicle behind the driver’s side door, backward.

The Chicago Police Department has announced the addition of more than 200 officers to a special unit assigned to addressing violent crime in the Windy City.

A K-9 with the Vacaville (CA) Police Department is now credited with the apprehension of two burglary suspects who had attempted to hide from police after leading them on a vehicle pursuit.

A motor officer with the Capitola (CA) Police Department was injured by a suspected DUI driver over the Labor Day Holiday weekend.

The rescued children are between the ages of 13 and 18. Children have been recovered in Cleveland, East Cleveland, Akron, Mansfield, Euclid, Willoughby and as far away as Miami.

Officers and citizens from cities and towns across northern New Jersey lined the streets as a procession was conducted for a K-9 who died suddenly in the line of duty.

The Marshals Service identified 15 of the kids as being victims of sex trafficking.

K-9 Ronja, a two-year-old German shepherd, was reportedly engaging the murder suspect when he shot her.