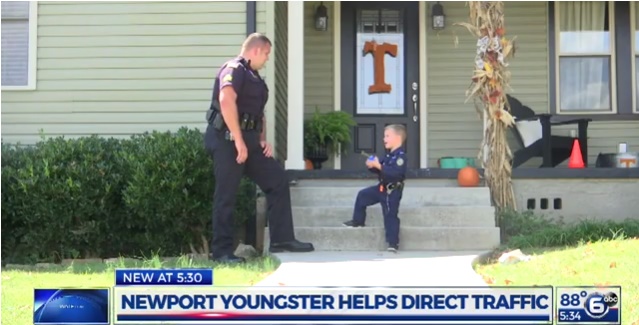 A little boy in Tennessee who lives near an elementary school has started "helping" a Newport, TN, officer direct traffic in the afternoons when school lets out, reports WATE.

Four-year-old Sawyer Schimming's mother, Allison Schimming, says he loves playing police officer. He got the costume last Halloween and wears it at least once a day. "I think it's the most adorable thing," she says.

"I had a lot of training," says Sawyer. The boy has formed a special bond with Sgt. Justin Vinson who actually directs traffic every day.

"He's my little partner. Just one day a few weeks ago he just showed up on the corner of his yard here and started motioning traffic and helping me," says Vinson.

Sawyer takes his responsibilities very seriously by telling people to slow down.

"To watch the parents come by just smiling and laughing and the kids just seeing it as well, I mean, it's something good," adds Sgt. Vinson.