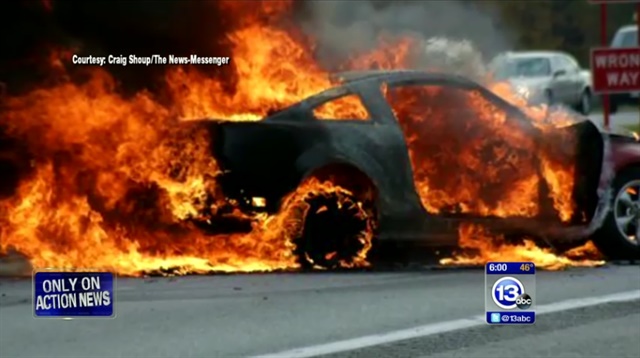 After a car crash, an Ohio State Trooper and a nurse who stopped to help pulled a man from a burning car before it exploded, reports WTVG.

State troopers say a Ford Mustang pulled into the path of a Dodge Durango and was T-boned. The driver of the Durango had minor injuries. But the driver of the Mustang, identified by police as Jose Gonzalez, 21, was trapped.

Ginger Havlin, a registered nurse from Bellevue, got out of her own vehicle and ran to check on the Gonzalez. Moments later, Trooper Donte' Hanns arrived and the Mustang caught fire.

According to Lt. Matt Meredith, Trooper Hanns ran to the passenger side of the vehicle and used his extendable baton to break the window and set the driver free. "He got his shoulders and I got in and wedged his legs out," describes Havlin.

Seconds after that, Hanns and Havlin were leading the driver to safety as the car exploded behind them.

"Trooper Hanns was in the right place at the right time. He used his training and basically put himself in harm's way to help save somebody else's life," adds Lieutenant Meredith.

Gonzalez was cited for Driving Under the Influence. His arraignment was set for Wednesday, but he reportedly did not show up.