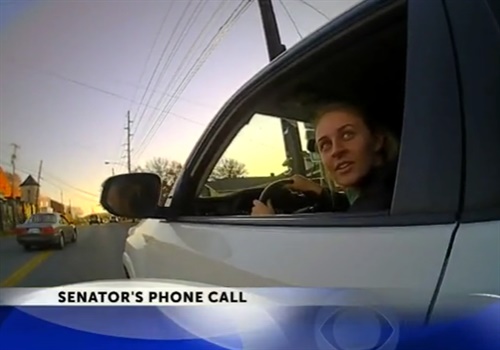 A Bristol, TN, police officer has been fired after speaking his mind on camera about department policy during a traffic stop involving a senator's daughter.

Sen. Jon Lundberg says he regrets calling the police chief after Phil Kiersnowski pulled over his daughter last month. The officer ticketed Sam Lundberg for a window tint violation, but during the traffic stop criticized the police department's window tinting enforcement and urged Lundberg to get her father involved, reports WJHL.

"I am going to give you a citation, because that's only because the admin's on our a**," Kiersnowski said while trying to mute his microphone during the traffic stop. "One phone call from your dad will probably save us a lot of heartache."

A department memo cited two major issues for the termination.

"After reviewing the video, it is apparent that Officer Kiersnowski attempted to disable his audio which could be evidence and is also part of the official records of the police department," the chief said in the Nov. 30 memo. "Officer Kiersnowski was insubordinate with his attempt to persuade someone to take action to change police department policy that he does not agree with."

While Sen. Lundberg agrees the officer should've acted better, he can't believe the officer lost his job as a result.

Sen. Lundberg's since even hired Kiersnowski an attorney in an effort to try to help the officer get his job back.