Retay Arms Ltd. STI. of Konya, Turkey, has brought the push-button removable trigger to the semi-automatic shotgun for the first time, according to the company.

The push-button removable trigger is not a new concept as it has been a common feature on very high-end, very expensive competition shotguns for years. Competitive shooters adopted the design primarily so that they have the ability to replace a malfunctioning trigger quickly rather than having to forfeit a match or switch to a new gun. It also enabled shooters who put a high volume of rounds though their shotgun the ability to clean and service the all-important trigger group quickly and easily. Less time cleaning means more time shooting and that is an appealing concept.

Now thanks to the engineers at Retay Arms, everyone can enjoy the benefits of this technology at a reasonable price point, the company says. The Retay Removable Trigger (RRT) comes as standard equipment on the Retay Arms Masai Mara shotgun. The Masai Mara is a feature packed high performance inertia action shotgun with a starting MSRP of $799.00.

The Masai Mara's distinctive removable trigger group is designed around the solid one-piece milled aluminum trigger housing that acts both as the trigger guard and platform for the internal moving parts including the shell elevator. To remove the trigger, one simply presses a small button located just above and slightly behind the cross bolt safety while at the same time pressing the bolt release button on the side of the receiver. This allows the entire trigger group to rotate downward and out of the receiver. A video demonstration can be found HERE.

Replacing the trigger group is also straightforward: just rotate the trigger group back into the receiver and press the bolt release. The trigger "clicks" effortlessly back into place. The entire removal and replacement operation is designed to take less than 7 seconds to accomplish without tools or fear of losing small parts.

Some of the benefits of having a removable trigger include easy cleaning, easy repair and replacement, and safer storage. 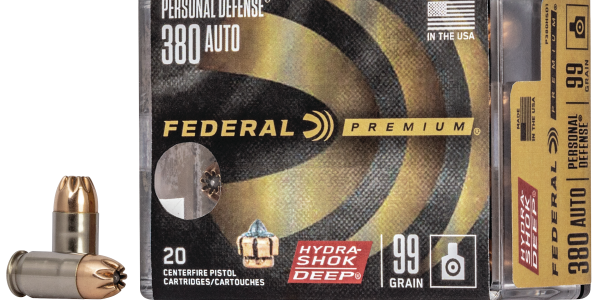 The newest addition to Federal's Hydra-Shok Deep lineup is the industry's first expanding 380 Auto to consistently meet FBI protocol recommendations for penetration (12 inches minimum) through bare gel and through heavy clothing, according to the company.

"Whether you have concerns about OSHA noise exposure limits or your local noise ordinance, learn about cost-effective solutions to provide your range personnel a safer and more productive work environment," Troy Acoustics says.

The Rapid Force Duty Holster was designed with direct input from active and retired law enforcement officers and military veterans, to address "what real users knew was lacking in conventional police holsters," the company says.

Discussion covers the different methods for concealing and deploying a carbine from concealment. Topics will include considerations for selecting a specific rifle, methods of concealment and deployment, and ballistics.

"The tactical benefits of reflex sights, more commonly known as 'red dot' sights, on military and law enforcement rifles and shotguns has been well documented over the past 20-plus years. Their use on service handguns is the next logical step," Trijicon says.

The class titled "Staying on Target: How to Outfit Your Shooting Range for Maximum Safety and Efficiency" is scheduled for 10:45 to 11:45 a.m. Tuesday Jan. 21 in the Marcello 4504 room in the Sands Convention Center.

Alien Gear's Rapid Force holster is designed to speed your draw and provide the mechanical retention to defeat the most determined gun grab.

About 3,200 qualified law enforcement officers are eligible to arm themselves for their personal protection, but not in the performance of their official duties under the new rule, Captain Joseph Butterfield, a U.S.M.C. spokesman, said on Thursday. They are required to have a concealed carry permit for the firearms.

FN America LLC has announced the release of the smallest addition to the FN 509 family of pistols, the FN 509 Compact MRD, an optics-ready compact pistol featuring the company's patented FN Low-Profile Optics-Mounting System.

“The way the G44 mirrors the iconic G19 is great and all levels of shooters will benefit from owning and practicing with the G44,” said Retired Marine Gunner Christian Wade.