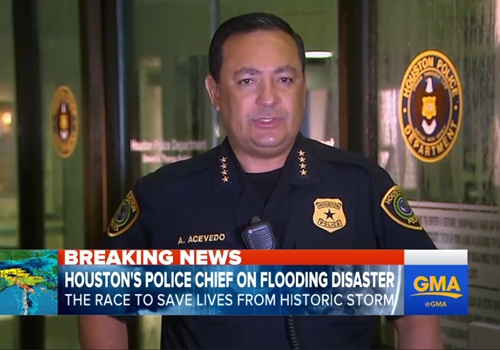 Harvey, since downgraded to a tropical storm, dumped catastrophic amounts of rain on Houston beginning Saturday, leaving thousands of drivers stranded and many more homes flooded out, reports KTRK.

"I'm happy to report we're down to about 250 folks that are still waiting for rescues or locations," Acevedo said. "We've made some great progress, and we're just really grateful that despite the power of this storm, we haven't had more loss of life."

The chief also talked about the "heart-wrenching" impact Tropical Storm Harvey has had on his officers.

"I've had officers tear up with the things they've seen with these children in the middle of the night," Acevedo said.

Acevedo also said officers are focused on protecting the city from looters as floodwater recede.