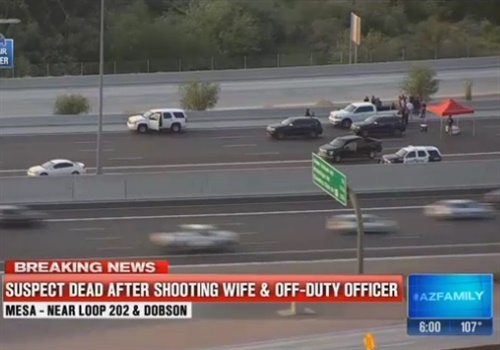 A suspect allegedly shot his wife and an off-duty Arizona police officer, both of whom are Casa Grande Police Department employees, then took his own life, reports KPHO.

Juan Pablo Rodriguez-Fregoso, 37, of Casa Grande, was found in his car near Loop 202 and Dobson Road late Wednesday afternoon, dead from an apparent self-inflicted gunshot wound.

The double shooting happened Wednesday morning near a middle school in Casa Grande.

The officer has been identified as 40-year-old Robert Price. He was found with multiple gunshot wounds to his torso and leg.

The civilian, identified as 39-year-old Yvette Rodriguez, was found with one gunshot wound to the upper back. Police say she is the wife of the suspect Rodriguez-Fregoso.

Both victims were flown to Phoenix area hospitals with serious injuries.