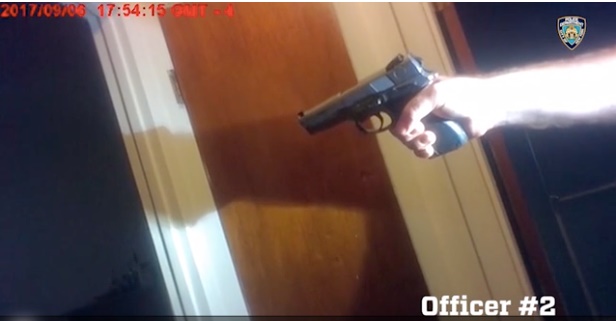 The NYPD on Thursday released its first-ever bodycam footage of a police-involved shooting — and it includes an officer warning the man “You are seconds away from getting shot” just before killing him.

A total of 48 minutes of footage from four officers’ cameras shows the tense standoff Sept. 6 that ended with the death of Miguel Antonio Richards, who threatened officers with a fake gun and a real knife.

Footage shows the landlord open a door to Richards’ darkened bedroom, revealing the 31-year-old standing still with a knife in his left hand and his right arm behind his back.

Fleming and Murphy repeatedly order the man to “put that knife down,” and ask what he has behind his back, but the stony-faced Richards silently glares at them through sunglasses, video shows.

“I don’t want to shoot you. This is not gonna end well for you if you don’t put that down,” Fleming sternly but calmly says before raising his voice and booming, “Put that knife down. You hear me?”