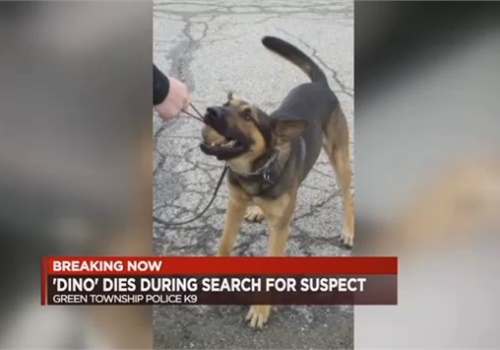 A Green Township, OH, police K-9 named Dino died in the line of duty after suffering a medical event as he tried to apprehend four suspects wanted in the reported kidnapping of a toddler, police said Tuesday.

The 15-month-old girl is now safe with her parents, but local law enforcement are mourning the death of the 7-year-old Belgian Malinois/Shepherd mix trained in narcotic detection and tracking, reports WXIX.

"Dino has been with the department since 2011 and was very much a part of our police family," their statement reads. "He had a reputation as an outstanding police canine and very much loved his work. He will be sorely missed."

Just before midnight, Dino and his handler, Green Township Corporal Tony Leidenbor, joined the search for four suspects wanted in a possible abduction reported about 10 p.m. Monday, according to police.

It began as a home invasion robbery by armed men with masks. As the woman in the home tried to fight them off, she told police they took her 15-month-old daughter. Initially, police described the toddler as a family friend.

She told police the men fled with her daughter in a Ford Explorer. The vehicle was spotted a short time later on Interstate 75 with the toddler inside and unharmed, Forest Park police said.