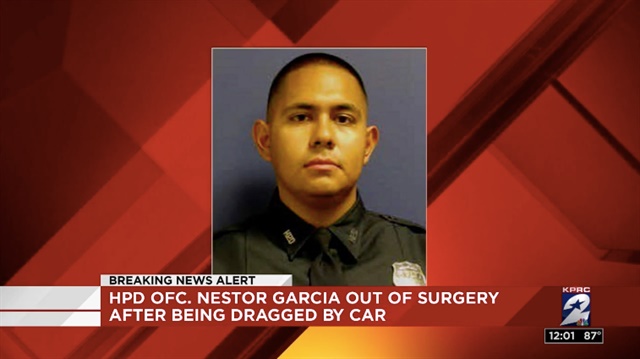 A Houston police officer with less than one year on the force was fighting for his life after he was hit by a vehicle and dragged Wednesday on Southwest Freeway while serving a warrant, police said.

Investigators said Officer Nestor Garcia, 24, spotted a stolen vehicle and followed the driver while he waited for backup. When officers arrived, they pulled the suspected car thief over in the emergency lane of Highway 59 and blocked off one additional lane, investigators said. When they got out of their units, another driver, 79-year-old Robert Zimmerman, hit Garcia and dragged him along the road, police told Click2Houston.

Zimmerman was driving 50 to 60 mph when he hit the victim, Houston police Chief Art Acevedo said.

Garcia was taken to Memorial Hermann Hospital, and was listed in critical condition, police said. Acevedo said Garcia was out of surgery but "not out of the woods."

One of Garcia's doctors outlined his injuries saying he suffered a head injury, abdominal injuries and fractures.

Zimmerman was arrested and charged with intoxication assault of a public servant.