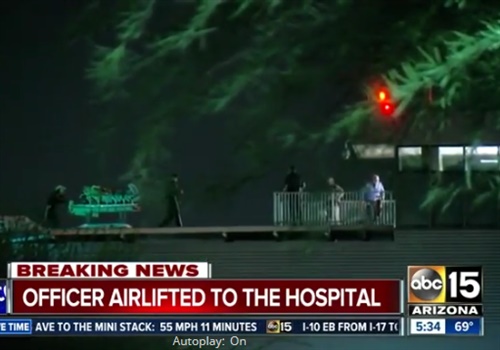 A Pinetop-Lakeside, AZ, police officer was flown to a hospital for treatment after being injured in a deadly shooting that also injured a K-9 Sunday night, reports KNXV.

According to police, officers were called to a Lakeside home around 10 p.m. Sunday to do a welfare check. A Tucson woman called police, worried that her son, Glenn Southwood Jr., had threatened to shoot his wife.

Officers responding to the home reportedly found Southwood with a firearm which he then began firing at officers. Officers returned fire. One of the officers was hit by the suspect's gunfire above the knee. He was flown to a Phoenix-area hospital.

Tactical teams were called to the home where Southwood had barricaded himself. Around 3 a.m. Monday, police deployed a K-9, which was attacked by a pit bull.

Police say the injured officer is out of surgery and is expected to make a full recovery. The injured K-9 officer is being treated by a veterinarian.