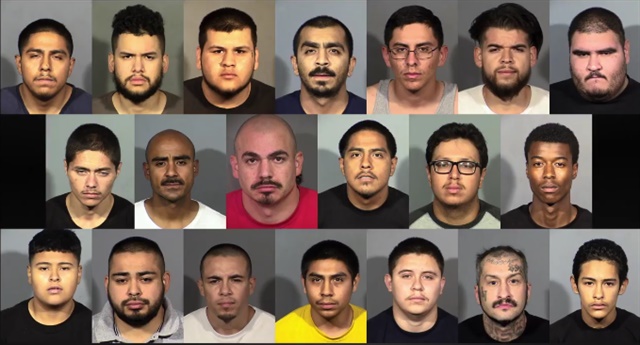 Las Vegas-area police and federal law enforcement agencies have crippled a longtime area gang, indicting most of its members in a state racketeering case, the first in Nevada targeting an entire organization, authorities said.

Roberts refused to name the gang, which originated in North Las Vegas and has been operating in the valley since the 1990s, saying he wanted to avoid giving it notoriety and publicity.

The gang operated in North Las Vegas and the northeast valley but was trying to expand, officials said.

"Las Vegas is a safer place today with these individuals behind bars, and we want to send a strong message to gang members who live in Las Vegas and those who come to Las Vegas and believe they can conduct criminal activity without impunity," said Roberts, who was flanked by local and federal officials as a slideshow of mug shots, weapons and drugs flashed on a screen.

Las Vegas Metro Police posted a video of the press conference announcing the bust on Facebook.