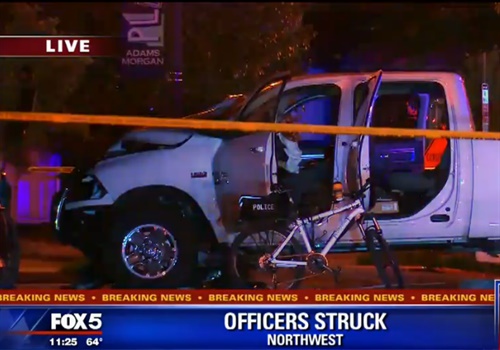 One of the officers was rushed into surgery Thursday night in very critical condition, according to Newsham. By Friday morning, the officer was out of surgery and was in critical but stable condition. The other officer is in fair condition, Newsham said. The District Department of Transportation employee is believed to have non-life-threatening injuries, reports Fox 5 DC.

After striking the officers, the truck proceeded through the intersection and ended up hitting a large unoccupied dump truck parked on the roadway just past Columbia Road in Adams Morgan.

The two suspects were quickly taken into custody. One of the suspects faces charges including Assault with Intent to Kill.

Chief Newsham said in a news conference that a weapon was recovered from the striking vehicle.

When asked if this incident may be terrorism-related, Newsham said, "We have to look at that very closely. We do not have a motive at this time." Several FBI agents were seen arriving at the scene on 18th Street late Thursday night.