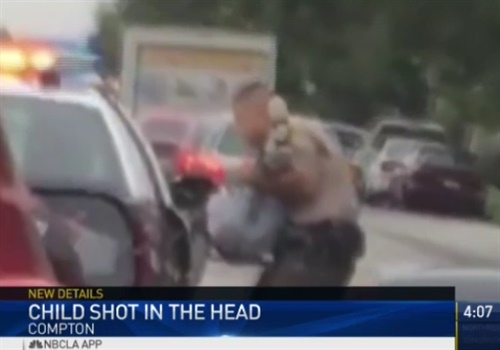 To make sure the boy would quickly get the medical attention he needed, Deputies Austreberto Gonzalez, Brian Reza, and Sergio Jimenez made a split-second decision and took him to the nearest police cruiser so he could get to the hospital. One deputy drove, one cradled the boy in the back seat, and one stayed behind with the mother until she could join them.

"Based on severity of wounds, it would be better to transport him by patrol car," said Gonzalez. "It was a combined effort from everybody: our air unit, our dispatchers and the hospital. We got there and they were waiting for us."

Hospital officials said the deputies' quick decision may have helped save the life of the child, who remains in critical condition after the stray bullet that lodged in his brain was surgically removed, reports the Los Angeles Times.

The boy was shot shortly before noon Wednesday during what Sheriff's Capt. Mike Thatcher described as a "violent dispute" between two groups in the 4600 block of Compton Boulevard. Thatcher said the incident was "gang-related" but declined to comment further on a motive for the shooting. One suspect was in custody Thursday.