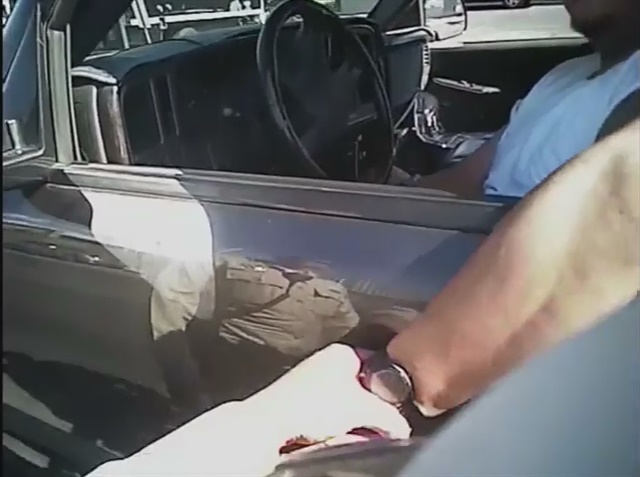 Before an exchange of gunfire between a suspect and a Las Vegas Metro Police officer last week that left the man dead and the officer wounded, Miguel Salas spent minutes sitting in the driver’s side of a pickup truck repeatedly asking why the policemen — who were investigating a stolen cellphone — wanted him out of the vehicle.

Officer Richard Nelson, 33, who was hit by a round that made its way through a gap in his bulletproof vest — in the armpit area — and dug into his chest and through his lower back, is OK and at home after being medically cleared, Clark County Assistant Sheriff Tom Roberts said Friday.

Nelson and his partner, who barely dodged injury, are “very lucky” to be alive, Roberts said.

The aftermath also was recorded. “Shots fired; I’ve been hit. Shots fired, I’m hit,” Nelson tells dispatch as he coughs. He later expresses that he’s having trouble breathing, something obvious from the video’s audio.

An arriving sergeant rushes him to University Medical Center. “The decision by that sergeant was critical in helping him to ensure that Officer Nelson survived this incident,” Roberts said.

The incident footage begins at around 6:30 on the video.