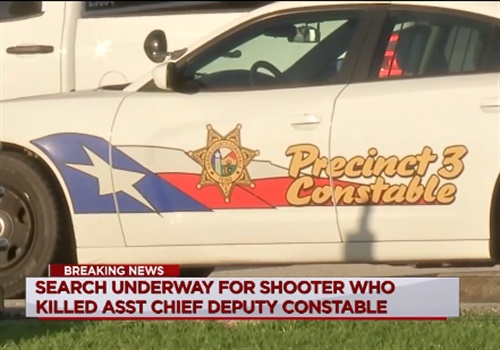 A deputy constable has died after being shot at the courthouse in Baytown, TX, reports KTRK.

There was no word on the suspect, who is presumed to still be on the run after the shooting at 7 a.m. There was no description given of the shooter.

Authorities told KTRK the shooting happened at the back of the courthouse as the deputy constable arrived at work. Investigators said Greenwood was shot in the neck and radioed for help, reportedly saying, "I'm bleeding out."

Another deputy nearby rushed to his aid, applying pressure to Greenwood's neck. They were able to get him help, flying him via Life Flight to Memorial Hermann Hospital, but sadly, he has died of his injuries.

Baytown police said it was not clear if Greenwood was targeted or the circumstances behind the shooting. They did not release any further information about the shooter.

The search is now on for the shooter. Deputies are using a helicopter and officers on the ground to find the suspect.