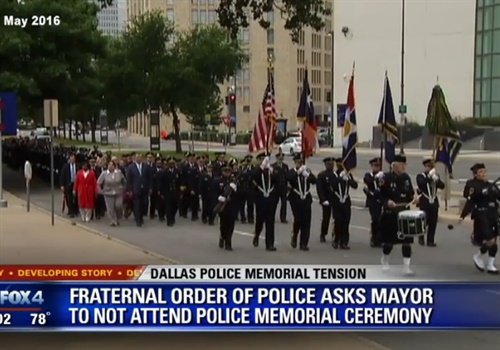 The Dallas police officers murdered in the deadly 2016 downtown ambush will be honored at next week's Police Memorial Day ceremony, but one of the city's largest police organizations on Tuesday told the mayor he's not welcome, reports Fox News.

The Dallas Fraternal Order of Police released a letter Tuesday telling Mayor Mike Rawlings they don't want him to show up.

In the letter, FOP President Michael Walton wrote, "Mr. Rawlings, the rhetoric that you have displayed over the past several years towards police has hit an all-time high."

Walton goes on to say that the widows of the officers slain on July 7, retired officers and current officers "are left suffering due to the low pay, and officers are leaving in record numbers under your watch." Walton said several of the widows and several officers asked him to ask Rawlings not to come.

Walton said the mayor will make it about him, with "political grandstanding." Walton said, "You say one thing one week and another the next, so we don't know which message you're sending, so we're asking you not to send a message at all."