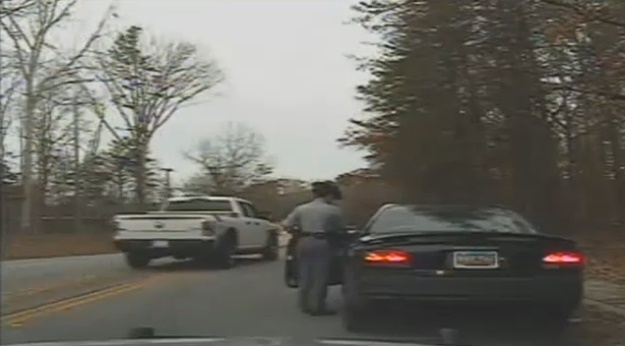 VIDEO: SC Trooper Chases Down and PITs Suspect After Being Dragged at T-Stop

Video from a South Carolina trooper's in-car video system was released Tuesday showing a violent traffic stop in the Upstate in December.

On Dec. 14, the trooper conducted the stop on Highway 25 around 1:30 p.m. The suspect vehicle, an Oldsmobile Intrigue, was later determined to be stolen.

"Do not do what I think you're about to do," she said, moments before he sped off, reportedly dragging her behind the vehicle for a short distance.

The trooper was able to make it back to her patrol car and pursue Saunders, who was arrested after she used a PIT maneuver to crash his vehicle on a two-lane road.