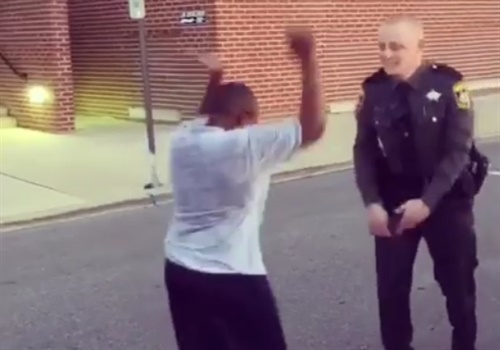 A sheriff's deputy was challenged to a dance-off by a young boy in North Carolina on Monday evening, and the two did not disappoint with their moves, reports WSOC.

Video of the two doing the running man to Zay Hilfigerrr and Zayion McCall's "Juju On That Beat" has gone viral on Facebook and garnered more than 59,000 views in less than 24 hours.

The sweet moment was recorded by Capt. Eddie Moore of the Nash County (NC) Sheriff's Office, who told ABC News that "it was too good of an opportunity to pass up and not get on camera."

Moore said he had been out in a parking lot fixing Deputy Cody Williams' vehicle when a kid named Jason came around and started talking with them.

"They got onto the topic of dance, and Jason told Deputy Williams, 'I bet I could dance better than you,' and the two just went at it!" Moore said.

Moore told ABC News he captured and shared the video because he wanted to dispel the notion that "officers are just there to arrest you or write you tickets."