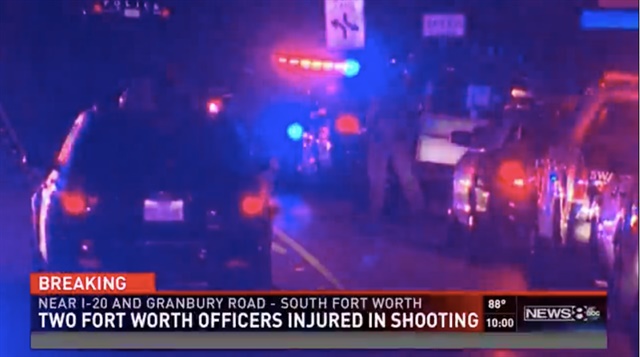 A suspect is dead and two police officers were injured Friday night while answering a 911 call about a suicide in Fort Worth.

Police say that the incident took place in the Wedgwood neighborhood of Fort Worth, at about 8:30 p.m.

Officer Ray Azucena and probationary officer, Xavier Serrano, who was in field training, arrived at the home and found one person shot dead inside the house, police say.

They were told a witness to the shooting may be in the shed in the backyard. When the officers approached the shed, they were fired upon. They returned fire, police said during a press conference.

Azucena was shot multiple times in the upper torso and extremities. He was in critical condition at John Peter Smith Hospital, but came out of surgery late Friday night and is expected to recover.

Serrano was struck once in his bullet-proof vest. He was alert and talking to officers after the shooting, police say, and was also taken to JPS.

The gunman was killed in a SWAT standoff that ended around 12:30 AM Saturday, WFAA TV reports.

Police say they have been called to the same home multiple times for domestic issues between a son and father.