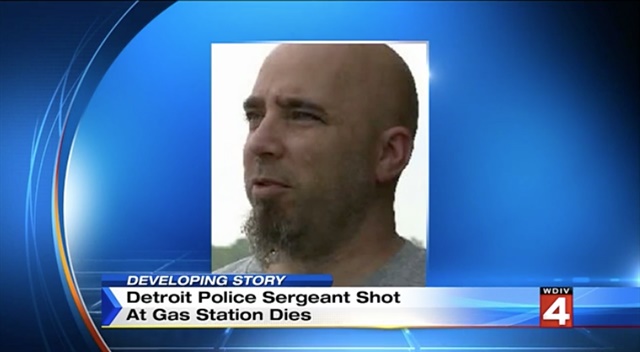 An officer who was shot Monday night at a gas station on the city's east side has died, Detroit police said.

Kenneth Steil, a sergeant from the Detroit Police Department's 9th Precinct, was pursuing a shooting suspect when the shots were fired at the Sunoco gas station at 7 Mile Road and Hayes Street. The suspect was armed with a sawed-off shotgun.

Steil was struck in the shoulder and taken to St. John Hospital. He was supposed to be released from the hospital Saturday, but had medical complications. Detroit police have confirmed Steil has died.

After a foot chase, police were able to take the suspect into custody,WDIV TV reports.

Mark Diaz, president of the Detroit Police Officers Association, released the statement below:

"The death of Police Sgt. Steil is nothing short of tragic. His death is the direct result of an individual who ambushed him and has deprived a wife of a husband, his children of their father, a the citizenry of the city of Detroit their true protector. His death is the result of being targeted and murdered because he is a police officer. The individual who pulled the trigger is not alone in being responsible for thistragedy. So responsible shall be the political leaders who have promoted anti-police rhetoric and failed to support our protectors. So responsible shall be our judicial leaders who allow political fear of being accused of not supporting media driven "fads" to drive their decisions. So responsible shall be any American who supports and/or participates in anti-police demonstrations.

"Police Sgt. Steil dedicated his life to protecting others. His life was taken by those who choose to judge our heroes instead of support them. And until civilized society as a whole stands together and denounces anti-police rhetoric, our police officers will continue to be in added unnecessary danger.

"For now I will affix a black band across my badge and mourn alongside the entire law enforcement community and every decent human being for our loss, feeling let down by our nation's leaders who do not support us. But know that every police officer will continue to protect the citizens of this great nation. And we hope everyone will continue to support us and push for our political leaders to protect us. Sgt Steil did not die in vain."