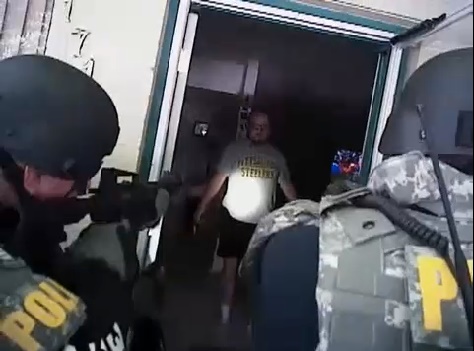 Arizona authorities have released footage of a Kingman, AZ, SWAT team serving a warrant on a local man for stolen firearm last Thursday. During the incident the suspect was killed and an officer was seriously wounded.

The Kingman police officer who was shot, Detective Dennis Gilbert, 57, remains in the hospital in serious, but stable condition and is doing well, according to officials.

Both Detective Gilbert and Detective Nicholas Schmitz, 27, have been placed on routine paid administrative leave, as they both fired their weapons during the incident.

Lieutenant James Brice, 58, had one bullet pass through his clothing; however, he was not injured, AZFamily reports.

Police say Cave was pronounced dead at the scene.