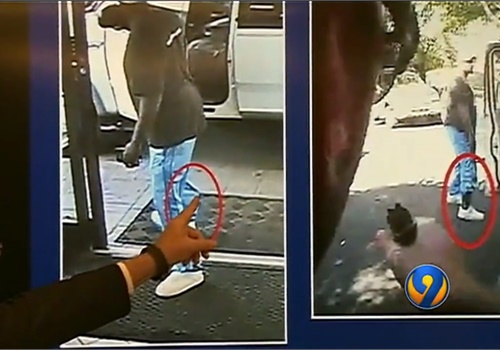 Mecklenburg County, NC, district attorney Andrew Murray said Wednesday morning that Charlotte-Mecklenburg police officer Brentley Vinson acted lawfully when he shot and killed Keith Scott in a case that touched off several nights of riots and protests in the city. No charges will be filed against the officer.

Murray said that 15 prosecutors reviewed the case and unanimously agreed on the decision.

Scott was sitting in his vehicle at an apartment complex when he was confronted by police. Police video showed officers shouting for Scott to drop a gun numerous times. Scott's family has said he was not armed.

However, Murray displayed a nearby store's surveillance video showing the outline of what appeared to be a holstered gun on Scott's ankle, and he discussed other evidence that Scott was armed.

Murray spent nearly an hour meticulously going over each detail in the investigation, and revealed new information to the public.

Murray explained that officers said they saw Scott with a gun in his right hand and that Scott was "in a trance-like state.”

Murray said the gun was cocked, its safety was off and it had a round in its chamber, WSOC TV reports.

"Officer Vinson was aware that Mr. Scott had a gun and chose to draw his weapon. Scott did not obey commands," Murray said.

He described false claims made by witnesses and said many of them didn't see the shooting and that some were inside at the time.

Scott's widow told investigators he did not own a gun, but Murray said text messages between them show otherwise.

"A month before the shooting there were text messages between Mr. and Mrs. Scott arguing about a gun," he said.

Murray said that Scott’s DNA was on the weapon retrieved at the scene and released details about the sale of the gun and ammunition.

Murray also said that all claims that an officer other than Vinson shot Scott were false, and said that Vinson took responsibility for the shooting from the beginning.

Murray told reporters that a reading book was never found in Scott’s SUV, only a composition book, which does not match descriptions from witnesses.

After the district attorney’s announcement, Scott’s family attorneys spoke with the press and said they still have questions as they consider whether to file a lawsuit.

Charles Monnett represents the Scott family, and noted that there are different standards for criminal charges than for civil liability. The lawyers said they haven't yet decided whether to pursue civil action.

"We look forward to reviewing the entire investigative file, we will look forward to obtaining justice," Monnett said. "We ask that the public withhold any judgment and support the family."

The family's lawyers also asked that if people protest, they do it lawfully and peacefully.

The family released the following statement:

"We wish to express our thanks and gratitude to Mecklenburg County District Attorney Andrew Murray, his office and the SBI for the respect they have shown the Scott family and for their willingness to explain how they conducted their investigation and the conclusions they reached.

"We are profoundly disappointed in their decision not to criminally charge Officer Brantley Vinson for his actions in taking the life of Keith Lamont Scott. While we understand that many in the Charlotte area share our frustration and pain, we ask that everyone work together to fix the system that allowed this tragedy to happen in the first place.

"All our family wanted was justice and for these members of law enforcement to understand that what they did was wrong. We respectfully ask that you please keep any protests that may occur peaceful.

"Responding to violence with violence is never an appropriate response. This is just one more step in our quest for justice."