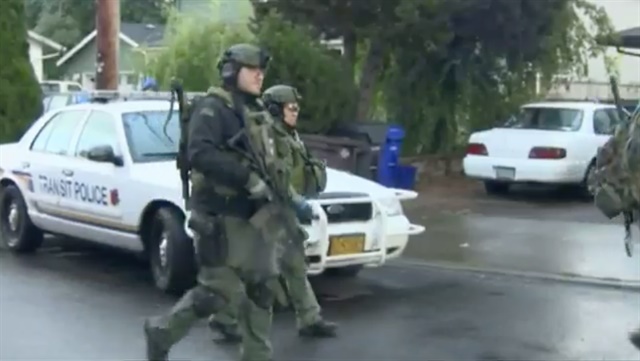 A SWAT team rescued a woman held hostage by a shooting suspect to end a standoff at a Subway restaurant in Gladstone, OR, Monday night, the Clackamas County Sheriff’s Office said.

The suspect, identified as Jeffrey C. Giddings, 45, of Klamath Falls, earlier shot at Gladstone Sgt. Lee Jundt several times, police said. One round struck Jundt's vest. He was not injured.

The incident started at 6:20 p.m. when an officer tried to stop Giddings, who was riding a bike, for a traffic violation, KGW TV reports.

Giddings tried to elude police until Sgt. Jundt found him in the parking lot of a Subway restaurant near Highway 99E and West Gloucester Street.

Giddings fired several times at Jundt and ran into the Subway, where he took a woman hostage. Several people were able to escape the restaurant.

SWAT team snipers shot Giddings and entered the restaurant. They brought the woman to safety while medics began treating him. Two shots were fired, Jensen said.