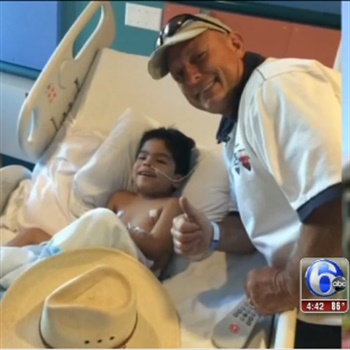 Corporal Curtis Shurtliff of the Clovis (CA) Police Department was camping with family at Dinkey Creek when he heard a desperate call for help.

Shurtliff is a former paramedic, and he took over the emergency response from the man who had pulled a 5-year-old boy named Gabriel, from the water.

"He was unable to get the breaths into the child because his lungs had filled up with water," Shurtliff said. "I tried twice and realized that wasn't going to work and literally picked him up upside down and squeezed him, and about a gallon of water and stomach matter and everything else came out."

But Gabriel had no pulse, and even after 30 minutes of CPR, Shurtliff couldn't get him breathing. Still, Shurtliff wasn't willing to give up.

Shurtliff prayed with Gabriel's mother, and then he felt a pulse. "And as I said 'in Jesus' name I pray,' I felt a pulse, and I didn't think it was his pulse because I thought my heart was beating so hard it was my pulse. And it wasn't," Shurtliff said. "It was his."

Paramedics took Gabriel to Valley Children's Hospital, where he is still recovering. Days later, Shurtliff visited the boy, who is now laughing and high-fiving and starting to act like a 5-year-old again.