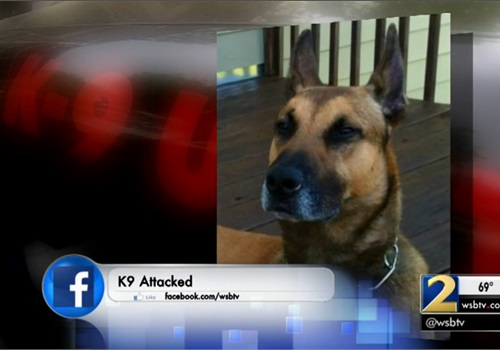 Jonathan Wimbs, 25, of Atlanta; Aron Davis, 24, of Lithonia; and a 14-year-old boy were arrested after allegedly breaking into a car outside a home in Sandy Springs, GA, reports the Atlanta Journal-Constitution.

The suspects fled into the woods, and Officer Michael DeWald's K-9 Rock sniffed out Wimbs, who was hiding in a drainage system ditch that dropped about eight feet down, DeWald said. When Rock bit into Wimbs' left arm, Wimbs pulled a set of spiked brass knuckles and punched Rock about six times.

Though the dog let go after being punched repeatedly, Rock chased Wimbs, biting his leg to bring him down to the ground where DeWald arrested him.

Rock, a 10-year-old Belgian Malinois, had three puncture wounds above his eye and needed four stitches, DeWald said. His eye socket was swollen and Rock lost a lot of blood from his nose, but the K-9 returned to work Tuesday on limited duty, basically hanging out in the truck and resting up, DeWald said.

"I couldn't have been more proud of my dog," DeWald said. "He did exactly what he was supposed to do, as he was trained, and he didn't hesitate one second."