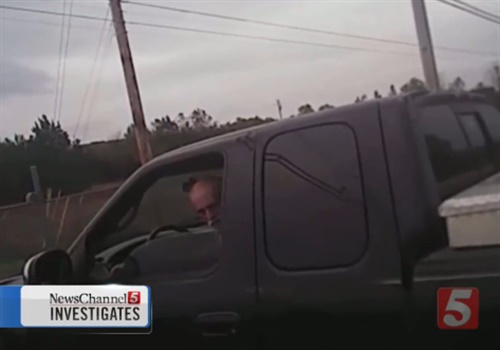 The video shows Officer Ahscari Valencia pull over his patrol car to speak with the driver of a pickup truck who was parked outside a storage facility.

Officer Valencia did not know the driver of the truck was Floyd Ray Cook, who had a long criminal history and was wanted on felony drug charges.

The video, from October of last year, shows Cook's odd behavior in the moments before he raised a gun and shot officer Valencia.

The bullet hit Valencia in the chest, but he was saved by his ballistic vest.

Cook sped away, beginning a six-day manhunt across parts of Tennessee and Kentucky.

Algood Police Chief Gary Harris praised the way Officer Valencia handled the situation and said the video shows how dangerous it is to be a police officer.