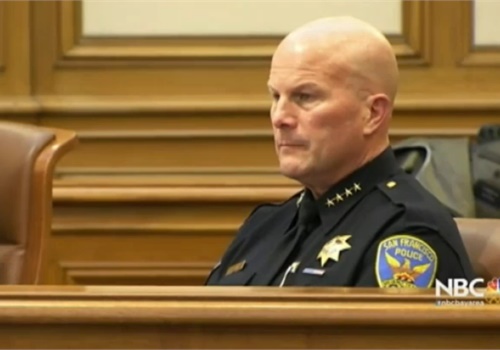 Police Chief Greg Suhr resigned Thursday from the San Francisco Police Department after the shooting of a black woman by SFPD officers that inflamed ongoing racial tensions in the city.

Mayor Ed Lee, who announced the resignation at a news conference late Thursday afternoon said he asked Suhr, who has served in the city's police department for more than 30 years, to resign.

The resignation comes after police earlier in the day fatally shot a woman in the Bayview District. Earlier in the day, Suhr said the woman was driving a stolen car and refused officers' commands to stop the car. Officers approached her on foot and she drove away. She was then shot by police.

Police told the San Francisco Chronicle there was no immediate indication that the woman was armed or had been driving the car toward officers when she was shot.

Dozens of people gathered in front of City Hall Thursday evening. The gathering was initially planned as a protest, but it turned into a celebration of Suhr's resignation among activists.

Phelicia Jones of the Justice for Mario Woods coalition said, "I am elated that he finally decided to resign. It's a small victory, but a victory all the same. But we still have a lot of work to do. We have to change a culture."