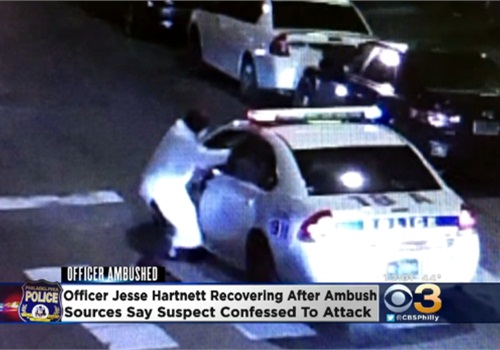 Authorities say a Philadelphia police officer is recovering after he was shot several times during an ambush late Thursday night in West Philadelphia, reports KYW-TV.

Philadelphia police commissioner Richard Ross says the officer, identified as 33-year-old Jesse Hartnett, was sitting in his patrol car around 11:30 p.m. at 60th and Spruce Streets when a gunman fired nearly a dozen shots through the driver's side of the car.

Police are calling it an "attempted assassination."

During a press conference, Commissioner Ross said the gun used in the attack was a stolen police firearm. Ross says the suspect has given a full confession, saying he did it in the name of Islam.

Despite being seriously wounded, Hartnett got out of his car, chased the suspect and returned fire, wounding his attacker in the buttocks, police said. Other officers chased Archer and apprehended him, reports the Associated Press.

Hartnett, 33, was shot three times in the arm and will require multiple surgeries, but was listed in stable condition. Archer was treated and released into police custody.