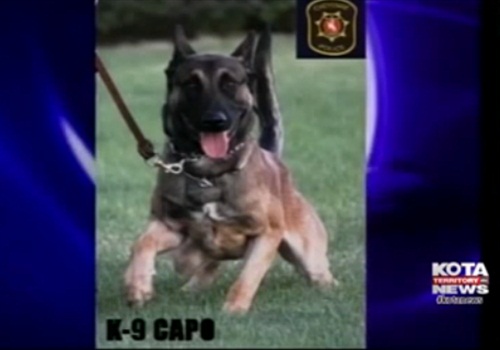 A Cheyenne (WY) PD K-9 is being credited with saving his handler from an attack Tuesday morning, reports KOTA-TV.

According to a release from Cheyenne PD officer Dan Long, Officer Lisa Koeppel responded to a report of two men, 40-year-old Aventura Palomo Jr. of Gillette and 32-year-old Adam Palomo of Cheyenne, fighting in the street.

Soon after Officer Koeppel’s arrival, the two men ran from the scene. Koeppel chased and caught up to them, and Palomo Jr. attacked the officer. He got on top of Officer Koeppel and began hitting her in the face. She was able to activate her remote door release, which freed K-9 Capo.

K-9 Capo ran towards the fight and, even after being kicked several times by Palomo Jr., was able to successfully apprehend him. The K-9 will receive an award for his actions.

Officer Koeppel was treated and released for her injuries.