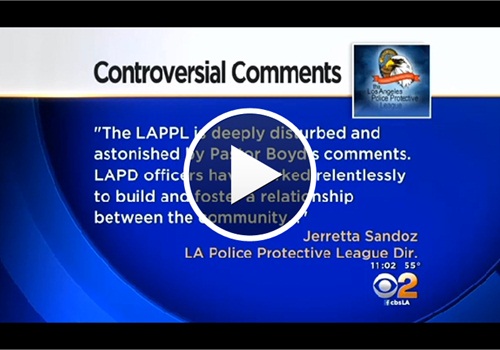 The senior pastor of a prominent Los Angeles church is at the center of a growing controversy after he compared police officers to the Ku Klux Klan in a recent sermon.

Pastor J. Edgar Boyd of the First AME Church delivered the sermon Jan. 18, stating: “Today, lynchings still occur but in a different form. The Klansmen today do not raid in the night raids with robes on and hoods on. But what they do is put a blue uniform on and a gold badge and take a baton or a police weapon, and they come at the least time we expect them and they take the lives of our young black men and young brown men. They take their lives long before they’re able to learn what God has in store for them in life.”

Neither LAPD Chief Charlie Beck nor L.A. County Sheriff Jim McDonnell showed up two weeks later at the First AME service they were expected to attend. Police sources told CBS2/KCAL9’s Dave Bryan it was because of the controversy over the video.

Mayor Eric Garcetti, whose office says he expressed his strong opposition to the statement in a conversation with Boyd, did attend last Sunday’s service and made a direct statement about it when he spoke to the congregation.

The Los Angeles Police Protective League released a statement that said: “The LAPPL is deeply disturbed and astonished by Pastor Boyd’s comments. LAPD officers have worked relentlessly to build and foster a relationship between the community and the police. Unfortunately, comments like those of Pastor Boyd only serve to tear down what has taken many years to cultivate.”