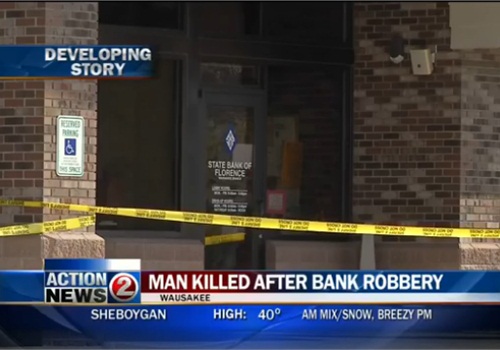 Police say Wisconsin State Trooper Trevor Casper was shot during a standoff in Fond du Lac with a bank robbery suspect Tuesday evening. The suspect was killed during that exchange of gunfire.

The robbery happened at the State Bank of Florence in the 200 block of Main Street in Wausaukee at about 2 p.m., according to the Marinette County Sheriff’s Office. The sheriff’s office says the suspect robbed the bank after firing a shot. Nobody is reported to have been injured inside the bank.

Police say the suspect then stole a bank employee’s vehicle and left the scene. A short time later, police were called to a scene a short distance away near the intersection of Highway 180 and Jermac Road. The call reported a man lying on the side of the road. When police arrived, they found the man dead beside a running vehicle. Police believe the suspect stole another vehicle, encountered the victim and shot him.

Police searched the area and found the bank employee’s car.

Officers then put out the stolen vehicle’s information to other law enforcement agencies, WBAY TV reports.

A Wisconsin State Patrol trooper spotted the vehicle at about 5:30 in Fond du Lac. The suspect and the trooper exchanged gunfire according to the Fond du Lac Police chief. Both the trooper and the suspect were killed.