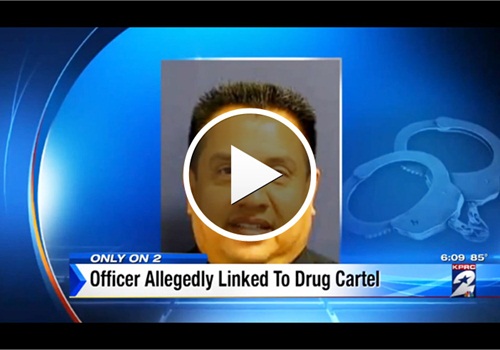 Testimony came Monday during a bond hearing for the officer. He was arrested last week after he was indicted in New Orleans for conspiracy to distribute 5 kilos or more of cocaine.

FBI agent Jose Garcia introduced video secretly recorded two years later showing the officer, in uniform, delivering two assault rifles to a government informant he allegedly assumed was a major drug trafficker. Garcia said the officer received a total of $4,500 for the guns and was told they were being shipped to Mexico. Garcia said the officer later supplied ammunition, magazines and pepper spray.

In the bond hearing Monday, the officer's attorney George Murphy argued that the former officer of the year did not know he was doing business with drug dealers.

The officer's sister testified he was a former Marine and a veteran of the Gulf War. She said she and his family are prepared to provide money to post a bond.

Judge Beverly Stacey ruled that the officer is entitled to be released on $50,000 bond on the condition he wear an electronic monitor, but Stacey stayed her ruling at the request of prosecutors who are appealing it to the presiding judge in New Orleans.