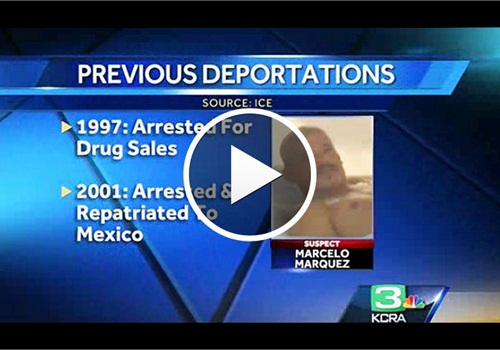 VIDEO: Suspect in Killing of 2 Calif. Deputies Was in U.S. Illegally

The suspect in the slaying of two lawmen Friday in Northern California had twice been deported, but authorities said a motive is still unclear in the shooting rampage.

Authorities said 34-year-old Luis Enrique Monroy Bracamonte was the shooter. He was booked on charges of murder, attempted murder, and carjacking. Authorities said that his weapons included an AR-15-type assault rifle, reports the Los Angeles Times.

Monroy, who is in the country illegally, was deported to Mexico in 1997 after his arrest and conviction in Arizona for possession of narcotics for sale, according to U.S. Immigration and Customs Enforcement. He was arrested and sent back to Mexico a second time in 2001.

He was booked Saturday as Marcelo Marquez, the name that he gave police and that appeared on an identification card. But immigration officials said that was an alias.

His wife, Janelle Marquez Monroy, 38, was booked on attempted murder and carjacking charges. Authorities say she accompanied her husband for much of Friday's six-hour rampage.