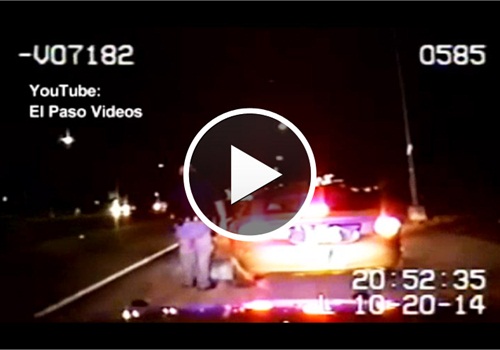 A dashcam video has surfaced on YouTube showing the moments when El Paso Police Officer Mike Garcia was shot in a drive-by shooting on Oct. 20.

Authorities said Garcia was shot by Frank Aparicio, who fired multiple shots at Garcia and then fled.

The video reveals how the incident started as a normal traffic stop.

A gold car belonging to Horacio Castaneda was pulled over because his headlights were not turned on, KFOX TV reports.

After Garcia returned back to his car to check Castaneda's ID, four shots were fired at him by a drive-by shooter. Garcia radioed in the message, "Shots fire, I got shot."

Castaneda got out of his car and walked back to the officer's car to render assistance. Other motorists also aided the critically wounded officer.

Garcia is still recovering from injuries. There's no word on when he will return back to work.

Aparicio -- the man police say shot Garcia -- was found dead Oct.. 21. Authorities said he had committed suicide. It is believed he was also responsible for murdering Cecilia Diaz in a home in east El Paso.