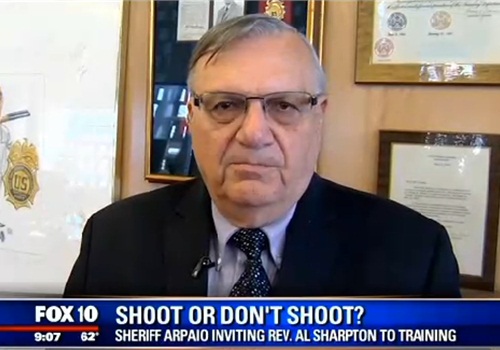 Sheriff Joe Arpaio of Maricopa County, Ariz., wants to ask the Rev. Al Sharpton to come to Arizona and take part in a use-of-force drill, after doing so changed the opinion of a local activist critical of police, reports KSAZ.

"Let's come on down here, I think you are the prime guy to do this and learn a lesson," said Sheriff Joe Arpaio. "Yeah, Al, I haven't seen you in a while, we could talk in my office and we'll put you through the scenario. We had two cops who were killed in New York City, assassinated."

To his credit, Rev. Sharpton did not say no to the sheriff's invitation. His director of communications provided this statement from the civil rights activist: "Despite our differences on immigration, I am all for working with the sheriff to try to find some ground on proper policing."